Next month's event in the Graduate Speaker Series hosted by the Grad Room (Harbord and Spadina, on the ground floor under the Grad House), focuses on linguistics and features two of our Ph.D. candidates. This will be taking place on Tuesday, December 4, from 6 PM to 7:30 PM. Registration is available here (there is no fee).

Emily Blamire (Ph.D.): "Judging talkers: How speech affects our perceptions of each other."
Humans convey a great deal of information with their speech, far beyond the actual messages we say with our words. Small changes in the sounds of our speech can have large and wide-ranging effects on how we are perceived as people. Humans can not only recognize familiar individuals from just hearing their voices, but we can also make various judgments about a person’s emotional state, gender, and age, and even judge attributes such as attractiveness and personality. Using data from perception experiments, this talk explores which aspects of the speech stream we are listening to when we make some these judgments, as well as how we go about recognizing the voices of people we have had limited exposure to.

Julien Carrier (Ph.D.): "Cultural renewal and language changes in Inuktitut."
Inhabiting the Arctic regions of Alaska, Canada and Greenland, the Inuit did not face the same socio-cultural and historical changes that most other Indigenous groups in North America had already experienced until the beginning of the 20thcentury when traders and missionaries began to take an interest in them. In fact, Inuit language varieties are believed to have remained quite similar until 1900 and to have diverged rapidly afterwards following these numerous transformations (cf. Dorais 1993, 2010). Indeed, many studies on the Inuit language report on dialectal distinctions and language changes (e.g., Johns 1999; Carrier 2012; Yuan 2018), but none of them present detailed statistics to support their claims or establish correlations with socio-historical factors. On the other hand, there are sociolinguistic studies that analyze the socio-cultural or historical changes that the Inuit have gone through, like the increasing bilingualism across the Inuit population (cf. Dorais &Sammons 2000; Patrick 2003), but no study has ever made a convincing correlation between them and dialectal distinctions or language changes. My dissertation fills this research gap. In this talk, I present and discuss results of my statistical analysis in North Baffin Inuktitut with natural data across speakers born between 1902 and 1998, and the interaction between some language changes observed in this Inuktitut dialect and different social and linguistic factors. 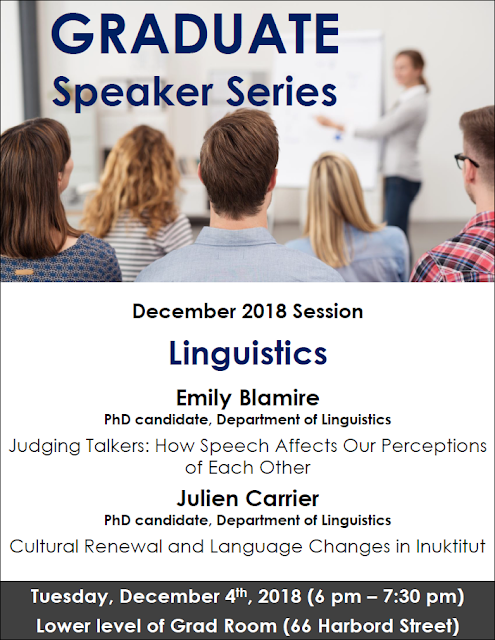 Posted by the U of T Department of Linguistics at 2:45 PM