Alana Johns has been announced as one of the two 2018 laureates of the National Achievement Award from the Canadian Linguistic Association. She will give a plenary talk at the CLA's Annual Meeting at the University of Regina at the end of May. Congratulations on this wonderful honour, Alana! Here is the CLA's announcement:

Dr L. Alana Johns has had a substantial impact on three areas of Canadian linguistics: theoretical morphosyntax, comparative research on Inuit dialects, and community work in language revitalization, maintenance, and documentation. Dr Johns is Professor Emeritus in the Department of Linguistics at the University of Toronto, where she also served as Director of Aboriginal Studies/the Centre of Aboriginal Initiatives. She spent the first part of her career at the Memorial University of Newfoundland. At both institutions, she inspired, trained and mentored many linguistics students, some of whom she brought to northern regions of Canada to engage in fieldwork. Today, an impressive number of her students have distinguished careers as scholars and as collaborators with Indigenous communities. The core of Dr. Johns’ theoretical contributions lies in her research on the morphosyntax of Inuktitut, specifically in her work on noun incorporation and on syntactic properties that underlie ergativity. Originating in her PhD dissertation and expanded throughout her career, this influential research has redefined our understanding of cross-linguistic variation in the domain of argument structure, agreement, tense, and case assignment. Furthermore, it has contributed to our knowledge of dialectal variation within the Inuit languages. Dr Johns has also collaborated with other scholars on issues such as phonological change, sentence prosody, and receptive bilingualism in Labrador Inuttitut heritage speakers. A strong advocate of participatory research between linguists and Indigenous communities, Dr Johns has contributed tremendously to creating a space for fruitful collaborations based on mutual trust and on the needs of the communities. In doing so, she has also contributed to redefining attitudes toward Indigenous people. In her work, she has trained and mentored community members to become Inuit language specialists. Her involvement in collecting and transcribing Inuktitut stories has contributed to preserving and enhancing the collective memory of the Inuit. Her language maintenance projects have produced grammars and teaching manuals on Inuktitut and Inuttitut as well as research documents such as the Dictionary of Utkuhiksalingmiut Inuktitut Postbase Suffixes (co-authored with Jean Briggs and Conor Cook), which is foundational to future revitalization efforts. In sum, Dr Johns has been a driving force in the study and promotion of the Inuit dialects of Canada. Her ongoing efforts to support language documentation and revitalization have enhanced the status of Indigenous languages and have served the field of linguistics. We are very pleased to recognize her advocacy and inspirational work by awarding her the National Achievement Award of the Canadian Linguistic Association for 2018.
Posted by the U of T Department of Linguistics at 8:39 AM No comments:

WSCLA and SAIL at the University of Ottawa (2018)

WSCLA (23rd Workshop on the Structure and Constituency of the Languages of the Americas) and SAIL (Symposium for American Indian Languages) were recently held together at the University of Ottawa (April 13th and 14th, 2018).

Posted by the U of T Department of Linguistics at 9:51 AM No comments:

Toronto Working Papers in Linguistics is happy to announce the publication of a special volume dedicated to research presented at the recurring phonology/phonetics workshop during Keren Rice’s time as Canada Research Chair.

This online volume can be found at the following link: http://twpl.library.utoronto.ca/index.php/twpl/index

We are very grateful to the authors, to the TWPL editorial staff, and to Keren, for making this volume possible.
Posted by the U of T Department of Linguistics at 10:26 AM No comments:

Naomi, Lex and Julien celebrated the end of a long grading day with a lasagne feast. 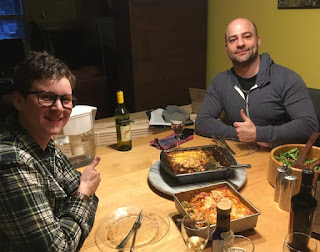 Posted by the U of T Department of Linguistics at 11:01 AM No comments:

On Friday, April 6th, 2018, the first annual Buffalo-Toronto Workshop on Linguistic Perspectives on Variation was held at the State University of New York at Buffalo. Presentations from our department:


Posted by the U of T Department of Linguistics at 7:49 AM No comments:

Carrie Gillon (MA 1999, now at Quick Brown Fox Consulting) and Nicole Rosen (PhD 2007, now at University of Manitoba) have a new book: Nominal Contact in Michif. From the OUP website, the book:

You can take a peek at the exciting contents inside at the following site:

Posted by the U of T Department of Linguistics at 10:59 AM No comments: