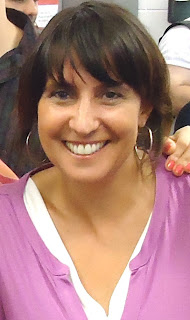 We are happy to announce that Cristina Cuervo is one of the recipients of the Faculty of Arts & Science's Outstanding Teaching Awards for 2013!

This honour is awarded to faculty members who demonstrate excellence in teaching, both in their teaching methods and in their ability to engage students in analytical thinking, to create an overall positive and rewarding experience for students. Nominees for this award are nominated by students, staff, and other faculty members, and the winners are selected by the Dean's office.

Members of our department who have received this honour in previous years include alumnus Abdel-Khalig Ali (now with the Department of Near & Middle Eastern Civilization) (2012), Jack Chambers (1999), and Keren Rice (1998).

Cristina, and the other recipients of this year's award, will be honoured at a reception to be held on April 16.

Posted by the U of T Department of Linguistics at 12:39 AM No comments:

Several members of our department are travelling to Lund, Sweden to present at the 36th GLOW (Generative Linguistics in the Old World) colloquium, which takes place April 2-6 this year.

Will Oxford is giving a talk entitled "'Same', 'different', 'other', and the historical microsyntax of the Degree Phrase", and Elizabeth Cowper and Daniel Currie-Hall (Saint Mary's University) will be presenting "A neoparametric approach to variation and change in English modals" in the Syntactic Variation and Change workshop.

In the Diachronic Workings in Phonological Patterns workshop, Elan Dresher, Christopher Harvey, and Will Oxford will be presenting "Synchronic systems in diachronic change: The role of Contrast".

Regular members of our Syntax project will also be presenting at GLOW. Ivona Kucerova (McMaster) will be presenting her poster on "Long-Distance Agreement in Icelandic revisited: An interplay of locality and semantics", and Gabriela Alboiu (York) will be giving a talk on "Raising to Object from finite CPs: dual A/A-bar and MCC", a paper co-authored with Virginia Hill (New Brunswick–Saint John).

Posted by the U of T Department of Linguistics at 12:02 AM No comments: 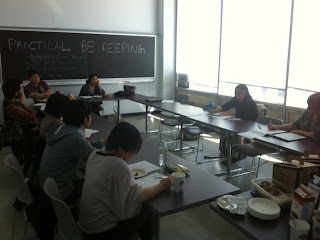 A couple of weeks ago a bunch of us met for an informal mini-workshop: *Practical BE-Keeping*. The idea was to bring together members of the department who were all working on topics relating to copulas, the verb BE, and verbal inflection, and see what came out of the discussion!

Rather than having a series of talks, we organized the discussion around a set of questions and themes. On the day of the workshop we started by organizing these questions (we had quite a list!) around a few basic themes, and establishing a common vocabulary (what did we mean by "copula" anyway?). 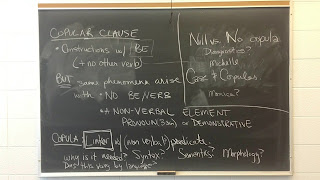 Then we divided into a few groups to discuss topics of particular interest: the relationship between copular structures and case; how to distinguish silence from absence; and the typology of factors that determine copula choice (aktionsart, tense, complement type) and its theoretical implications. Finally, we came back together and tried to pool our separate insights.
Overall, the day was a great success! It was a wonderful opportunity to sit down together and discuss a particular topic, beyond what we can do informally in the hall or the lounge! We have great hopes of organizing a follow-up event sometime in the summer, when people's schedules are more open, and would highly recommend similar events on other topics!

Posted by the U of T Department of Linguistics at 2:41 PM No comments:

Thank you to Michela Ippolito for sharing these photos from TOM 6! 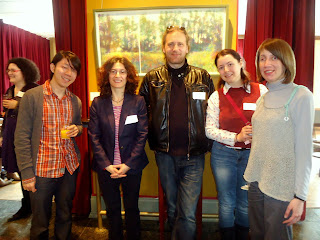 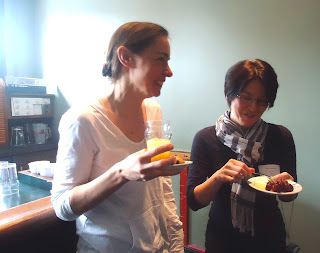 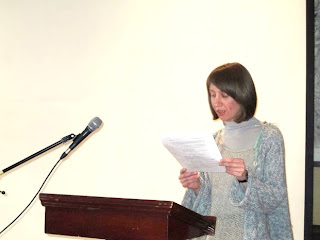 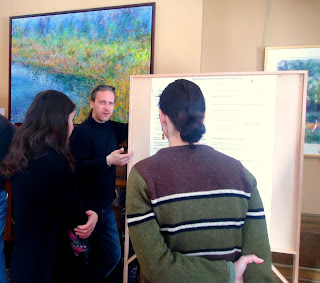 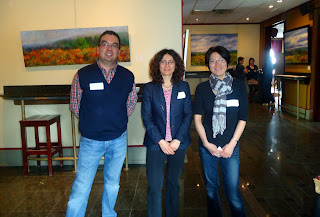 Michela with two of the workshop organizers from McGill, Luis Alonso-Ovalle and Junko Shimoyama 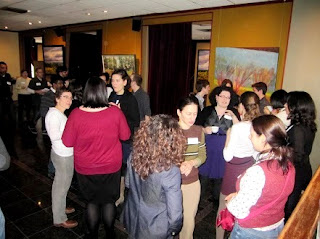 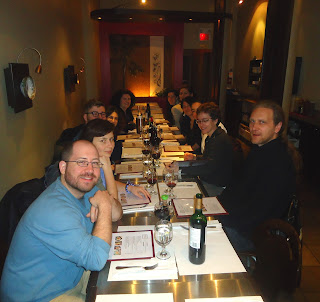 Posted by the U of T Department of Linguistics at 1:06 AM No comments:

Syntax project will be running this Friday, March 22nd, from 12-2 pm in SS560A.
Bryan Leferman, a visiting student from the University of Basque Country, will be presenting a talk entitled 'Evaluative Adjective Diathesis.'

Posted by the U of T Department of Linguistics at 3:37 AM No comments:

Phonetics/phonology group will be meeting at an unusual time this week.


Chris Spahr will be presenting a dry-run of his GLOW presentation titled: "A contrastive hierarchical account of positional neutralization".

Will Oxford will be presenting his recent work titled: "A description of Proto-Algonquian syllable structure".

Post courtesy of Joanna Chociej
Posted by the U of T Department of Linguistics at 3:05 PM No comments:

Sali was also interviewed on The Morning Show for Global TV yesterday morning!
You can watch the full 6 min. 40 sec. interview here.

Posted by the U of T Department of Linguistics at 9:33 AM No comments:

On Thursday, March 21, Elan Dresher will present a FLAUT talk entitled “Changes in Syllable Quantity and Stress in Middle and Early Modern English.” This event will take place at 7pm, in the Department of Linguistics lounge.

This talk will consider some changes in syllable quantity and the rules for main stress that had considerable effects on the prosody of English. The causes of these changes have been much debated, and touch on fundamental issues in diachronic and synchronic linguistics. The first set of changes altered the quantity (vowel length) of stressed syllables in the Middle English period, and pose the question: Why aren’t there more singular~plural pairs like staff~staves in Present Day English? At a more general level, these changes have led some to ask: are languages viruses that colonize children? The second set of changes involve the rules of main stress: why did native speakers of English adopt the Latin stress rule? Were these changes in progress already at the time of Chaucer (c. 1400), or did they occur considerably later? All the changes discussed in this talk show the relevance of the synchronic grammar and the role of language learners in accounting for phonological change.
Posted by the U of T Department of Linguistics at 7:40 AM No comments:

Sali Interviewed by the newspaper

Sali's research continues to draw media attention; you can read her latest interview with the newspaper, on p.4 of the Mar. 14th edition.

Thanks to Keren for the tip!

Posted by the U of T Department of Linguistics at 9:57 PM No comments:

Congratulations to Alex Motut, Ruth Maddeaux, and Ravi Wood, who have been awarded LSA Institute Fellowships to attend this summer's LSA Institute in Ann Arbour!

These fellowships are highly competitive and were awarded to only 75 undergraduate and graduate students, out of over 350 applicants.

The institute takes place from June 24 to July 19 this year.

Posted by the U of T Department of Linguistics at 3:01 AM No comments:

The Montreal-Ottawa-Toronto (MOT) phonology workshop is taking place at the University of Ottawa this weekend (March 15-17).

Speakers from U of T include:

Posted by the U of T Department of Linguistics at 2:56 AM No comments:

TOM at McGill University on March 23

The Sixth Toronto-Ottawa-Montreal Semantics Workshop takes place at McGill University this year. The one day workshop will be held on Mar. 23, 2013.

You can register for the workshop here.

Updated: Photos from the event are available here.


Posted by the U of T Department of Linguistics at 9:39 PM No comments:

Yesterday's Toronto Star included a feature on Sali Tagliamonte's research for her Toronto English Project, where she studied aspects of speech which are characteristic of different age groups and/or genders in Toronto English. The article describes her research methods and some of her findings, and includes comments from Torontonians (collected a day prior to the publishing of the article) on what they think are phrases typical of Torontonians. There is also a short video where Sali introduces herself and her work.

Posted by the U of T Department of Linguistics at 1:52 PM No comments:


Syntax project will be running as usual this Friday, March 8th from 12-2pm
in SS560A. Alex Motut will be giving a dry run of her talk "A Semantics
for Object-Oriented Depictives" and Bronwyn Bjorkman will be giving a talk
entitled "Curiosities of coordination: The unexpected absence of
coreferential subjects in TP coordination".

Posted by the U of T Department of Linguistics at 10:11 AM No comments:

Title: "Phonology as a Window into Speech Perception: Integrating Brain, Behavior and Theory"

Despite significant variation in the speech signal, we comprehend spoken language with little effort. The perceptual and brain mechanisms responsible for accomplishing this task, however, remain poorly understood. In this talk, I argue that the internal knowledge of our phonological system is central in imposing structure on the noisy signal and allows us to form predictions of what we will hear next. I support this position via an integration of behavioral and cognitive neuroscience methods and linguistic theory at different levels of phonological representations: category, phonotactic, long-distance harmony. First, I present evidence for a specific auditory scaling mechanism that helps us arrive at normalized vowel representations and is sensitive to phonological category structure. Second, using behavioral responses and real-time brain measures, I demonstrate that some aspects of speech sounds are not stored in their long-term representations, and that these specified representations provide the basis for predictions of adjacent sounds. Finally, utilizing both behavioral methods and the temporal precision of EEG, I show that listeners can use long-distance phonological dependencies as the source for their predictions and that evidence of these predictions is evident in early brain responses. Practically, this work demonstrates that theoretical concepts can be used in conjunction with an array of methods to understand long-standing questions in speech perception. Moreover, these results suggest that listeners use their rich phonological knowledge predictively during online comprehension, pointing toward a class of models that posit prediction and feedback.

Posted by the U of T Department of Linguistics at 4:50 AM No comments: