This week Julia Su successfully defended her thesis entitled "The Syntax of Functional Projections in the vP Periphery ". Her super committee of syntacticians consisted of Diane Massam (supervisor), Elizabeth Cowper, Susana Béjar, Alana Johns, Arsalan Kahnemuyipour, and Shigeru Miyagawa (MIT). Julia's defense marks the end of our summer defenses, but we look forward to many more in the coming year!

Congratulations to Julia and to all of our recent PhD graduates, and a thank you to all of our professors who have been patiently reading one thesis after the other during this very busy summer!

Posted by the U of T Department of Linguistics at 4:02 PM No comments: 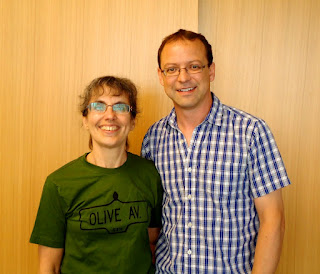 At the end of July, Paul Arsenault successfully defended his thesis entitled "Retroflex Consonant Harmony in South Asia". His thesis was supervised by Keren Rice, and the other members of his committee were Elan Dresher, Yoonjung Kang, Alexei Kochetov, Peter Avery (York University) and Gunnar Hansson (UBC). Paul has been working as an Assistant Professor of Linguistics at Tyndale University College in Toronto (http://www.tyndale.ca/person/paul-arsenault) and will continue his appointment there in September. Paul will be teaching courses on Introduction to Linguistics, Morphology, Introduction to Phonological Analysis, and Advanced Phonology. 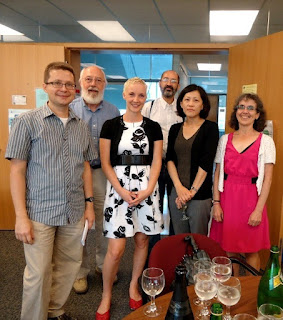 Last week, Beth MacLeod also successfully defended her thesis entitled "The Effect of Perceptual Salience on Phonetic Accommodation in Cross-Dialectal Conversation in Spanish". This was momentous for both Beth and her supervisor, Yoonjung Kang, because Beth's thesis is the first PhD thesis that Yoonjung has supervised. The other members of Beth's committee were Laura Colantoni, Alexei Kochetov, Jack Chambers, Keren Rice, and José Ignacio Hualde (University of Illinois at Urbana-Champaign). Beth is starting a 2-year appointment at Carleton University in September, where she will be teaching courses on Phonetics, Phonology, Spanish, the Structure of Spanish, Introduction to Hispanic Linguistics, and Topics in Spanish Linguistics. Beth will also be joining OttawaBabel
(http://www.ottawababel.com/), one of the offshoots of TorontoBabel (see http://utlinguistics.blogspot.ca/2011/10/toronto-babel-in-star.html).

Congratulations to both Paul and Beth!

Posted by the U of T Department of Linguistics at 2:35 PM No comments:

Jack Chambers was just interviewed today for a news segment about new words that have been added to the Merriam Webster dictionary. If you have cable TV, tune in to Global News 5:30-6:30pm today!
Posted by the U of T Department of Linguistics at 3:59 PM No comments:

In addition to winning the Molson Prize earlier this year, Keren Rice has also been elected as Fellow of the Royal Society of Canada!

This prestigious award recognizes her distinguished contribution to Aboriginal studies and linguistics.

Posted by the U of T Department of Linguistics at 8:52 PM No comments:

We successfully hosted two workshops in the past couple of weeks. The first workshop was the CRC-sponsored Summer Phonetics/Phonology Workshop, which included talks on topics in Korean, Cape Breton English, Cuban Spanish, Dholuo, Mandarin Chinese, and other languages. The workshop also featured a special session on "Directions in Teaching Undergraduate Phonology", which prompted interesting discussions.

The second workshop was the Lexicon-Syntax Interface Workshop, which included talks on topics in Amharic, Russian, Modern Hebrew, Malagasy, German, and other languages. The keynote speaker of the workshop was Tova Rapoport of Ben-Gurion University of the Negev, Israel, who gave a talk entitled "Focussing Manner and Result".

A big thank-you to the organizing committees of these workshops for all their hard work!

Posted by the U of T Department of Linguistics at 4:31 PM No comments:

In mid-June, Alana Johns and Richard Compton visited the Inuit community of Ulukhaktok, Northwest Territories, to assist in the creation of a second edition of a dictionary for the Kangiryuarmiut dialect. They worked with Emily Kudlak, the Ulukhaktok Language Officer, to begin the process of editing the entries and discuss the organization of the dictionary. 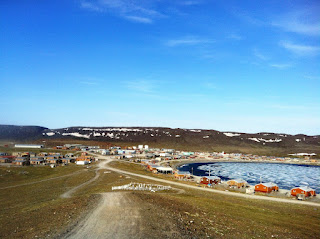 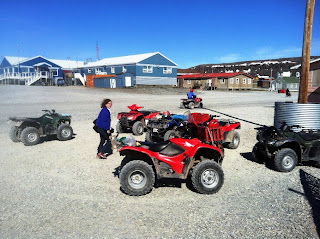 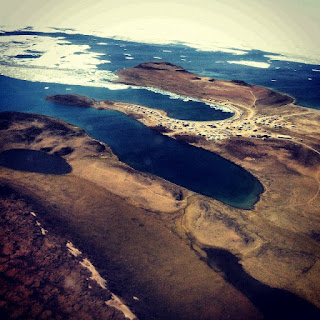 (Photo credits: Richard Compton)
Posted by the U of T Department of Linguistics at 3:35 PM No comments: