The Linguistic Society of American's 94th Annual Meeting is taking place in New Orleans from January 2nd through 5th. Alongside it are the annual meetings of a number of 'sister societies'. Current U of T linguists and alumni taking part are:

Bettina Spreng (Ph.D. 2012, now at the University of Saskatchewan) has a poster:
"v-Asp Feature Inheritance: Some insights from Inuktitut and Swabian (Alemannic)."

Fulang Chen (MA 2017, now at the Massachusetts Institute of Technology)
"Split partitivity in Mandarin: A diagnostic for argument-gap dependencies."

Karlien Franco (postdoc) and Sali A. Tagliamonte (faculty):
"How to gain a new guy in 10 decades: A study of lexical variation in Ontario dialects."

Lauren Bigelow (Ph.D.) and Sali A. Tagliamonte (faculty):
"Where have all the articles gone? Bare nominals in Marmora and Lake, Ontario."

Alexandra D'Arcy (Ph.D. 2005, now at the University of Victoria) has a poster:
"On being a caregiver and a community member in the midst of language change."

Society for the Study of Indigenous Languages of the Americans (SSILA)

Michael Barrie (Ph.D. 2006, now at Sogang University)
"The prosody of anger and surprise in Cayuga."

Alexandra D'Arcy (Ph.D. 2005, now at the University of Victoria) is part of a panel with Joseph Salmons (University of Wisconsin-Madison) and Rik Vosters (Vrije Universiteit Brussel):
"Historical sociolinguistics: Lineage and leading edge."

Society for Computation in Linguistics (SCiL)

Society for Pidgin and Creole Linguistics

James Walker (BA 1989, now at La Trobe University):
"Complements of the Eastern Caribbean."
Posted by the U of T Department of Linguistics at 7:49 PM No comments:

In conjunction with the United Nations International Year of Indigenous Languages for 2019, the CBC has profiled our own Chris Harvey (Ph.D.) and the extensive work that he has been doing for digital typography of Indigenous languages of Canada.
Posted by the U of T Department of Linguistics at 11:53 PM No comments:

Alexandra D'Arcy (Ph.D. 2005, now at the University of Victoria) is profiled this week in the Arts & Science newsletter with a focus on her well-underway Kids Talk project, which follows young children from the age of three well into elementary school and explores when variation appears and what it looks like.
Posted by the U of T Department of Linguistics at 5:54 PM No comments:

Naomi Nagy (faculty) has recently brought the holiday spirit into her sabbatical research activities through two talks! One was at the University of Maine on December 4: "How a linguist thinks about chocolate." The other, at the University of Duisberg-Essen on November 14, was: "Intergenerational change in Toronto's heritage languages?" It was part of a special lecture series, as follows: 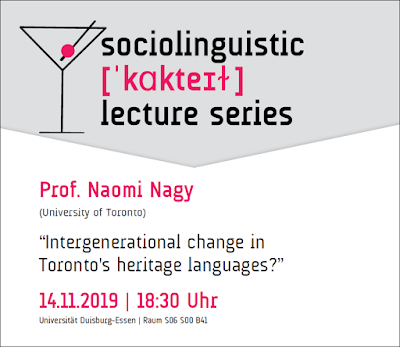 Posted by the U of T Department of Linguistics at 10:40 PM No comments:

Workshop on Speech and Attitude Reports in Brazilian Languages

A talk on quotatives in Ye'kwana and Taurepang included two of the undergraduates students from the U of T who took part in Suzi's REP course over the summer - Octavia Andrade-Dixon and Guilherme Akio Teruya - as well as Suzi and the local professor who helped organize the REP course, Isabella Coutinho Costa.

(Thanks to Suzi for the photos!) 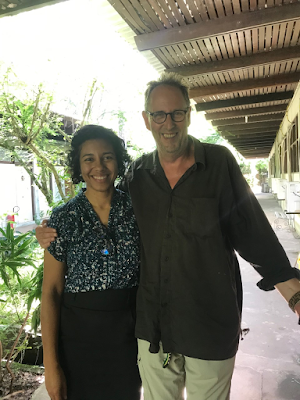 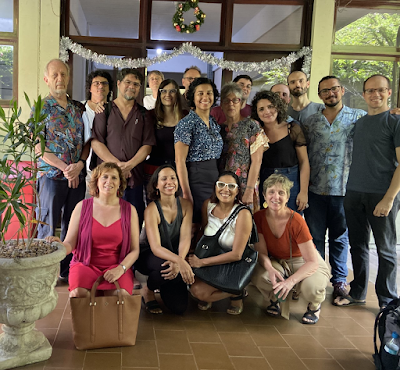 Most of the workshop presenters!
Posted by the U of T Department of Linguistics at 6:33 PM No comments:

At the end of 2019, we have much to celebrate - even on top of conferences, publications, workshops, awards, new jobs, graduations, guest speakers, birthdays, outreach, and the U.N. International Year of Indigenous Languages.

We also have a couple of ten-year anniversaries to mark. For one thing, it has now been a decade since our relocation! We spent the week of December 14-18, 2009 moving from the sixth floor of Robarts Library to the fourth floor of Sidney Smith Hall. Given the choice between a classroom and a lounge in Sidney Smith Hall, we opted for a lounge - which has since become the central crossroads and gathering-place of the department. It has served not only as workshop venue, reception area, and lunchroom, but also a veritable incubator of friendships and research collaborations (sometimes both at once). Attesting to its value, graduate students talking to prospective students sometimes single out the lounge as a major advantage of our department.

This blog is also now ten years old, having been established in the second half of 2009. It has since been through several editing teams and underwent a visual overhaul in the autumn of 2015, but has been chronicling department life for a decade. Here's hoping this ultimately proves to have been just one decade of many!
Posted by the U of T Department of Linguistics at 2:24 PM No comments:

Harbour (2016) argues for a parsimonious universal set of features for grammatical person distinctions, and suggests (ch. 7) that the same features may also form the basis for systems of deixis. We apply this proposal to an analysis of Heiltsuk, a Wakashan language with a particularly rich set of person-based deictic contrasts (Rath 1981). Heiltsuk demonstratives and third-person pronominal enclitics distinguish proximal-to-speaker, proximal-to-addressee, and distal (in addition to an orthogonal visibility contrast). There are no forms marking proximity to third persons (e.g., ‘near them’) or identifying the location of discourse participants (e.g., ‘you near me’ vs. ‘you over there’), nor does the deictic system make use of the clusivity contrast that appears in the pronoun paradigm (e.g., ‘this near you and me’ vs. ‘this near me and others’). We account for the pattern by implementing Harbour's spatial element χ as a function that yields proximity to its first- or second-person argument.

This paper examines the nature of person complementarity in Eastern Canadian Inuktitut (Eskimo-Aleut), arguing that despite its apparent patterning as a Person Case Constraint (PCC) effect, it is not due to the presence of a defective intervener blocking person agreement with a lower argument, as is often the case in other languages. Instead, the observed effect is caused by a defective or missing person probe on C that cannot value local person features on absolutive arguments. Given the use of the PCC as a diagnostic for differentiating clitics and agreement, this result has implications for the proper identification of φ-marking in Inuktitut.

In French ditransitive sentences, certain person combinations of the two internal arguments cannot be expressed with two co-occurring clitics (a phenomenon referred to as the Person Case Constraint or PCC). To fill the interpretational gap created by this restriction, there is an alternative construction characterized as a 'repair', where the goal is realized as an independent phrase. The fact that the double-clitic construction and the repair construction are in complementary distribution led to a proposal of an interface algorithm that provides a way to repair a non-convergent structure. This article proposes an alternative account of the PCC, and claims that the complementarity between the PCC and its repair is instead accidental and is an artefact of the feature structure of arguments. The proposed account explains the unavailability of certain clitic combinations and some repairs independently, without resorting to a trans-derivational device like the previously proposed algorithm.
Posted by the U of T Department of Linguistics at 11:47 AM No comments:

This semester, our teaching team for LIN101: Introduction to Linguistics: Sound Patterns (consisting of faculty member Peter Jurgec and fourteen TAs) had the students do small independent research projects of various types. Among the video projects, there were three standout submissions - which we are thrilled to share with the wider community!

Music and Language
Loanwords
Phonology of Elvish
Posted by the U of T Department of Linguistics at 10:58 PM No comments:

Jessamyn Schertz (faculty), Yoonjung Kang (faculty), and colleague Sungwoo Han (Inha University) have a new paper in Laboratory Phonology, 10(1): "Sources of variability in phonetic perception: The joint influence of listener and talker characteristics on perception of the Korean stop contrast."

Where there is dialectal variability in production of a sound contrast, listeners from the two dialects may show parallel differences in perception. At the same time, perception is not static and can be influenced by other factors, including listeners’ experience with, and expectations about, different talkers. This work examines perception of the Korean three-way stop phonation contrast by listeners of two dialects of Korean. We examine to what extent listeners’ perception reflects production norms in their local community and, via a reverse matched-guise task, test whether their knowledge of cross-dialectal variability plays an active role in the way they categorize the contrast. While perception appears to reflect production norms on a broad level, we found age-related differences in perception, even for listener groups who showed no sign of a parallel difference in production. Furthermore, listeners showed different response patterns depending on the apparent dialect of the talker. Our results suggest that exposure to dialectal variability and expectations about the talker influence perception.
Posted by the U of T Department of Linguistics at 9:49 PM No comments:

Will Oxford (Ph.D. 2014, now at the University of Manitoba): "Deriving variation in inverse marking."
Algonquian languages are known for the special 'inverse' agreement pattern that appears in some transitive verb forms. It is less well known that the precise distribution of the inverse pattern varies extensively: across the Algonquian family, transitive forms in which a non-SAP acts on an SAP show eleven different distributions of inverse marking. I show that these eleven contexts fall along a striking 'staircase' cline. I argue that each step along the cline - that is, each different distribution of inverse marking - can be derived simply by varying the features sought by the probe on Infl. This analysis is consistent with proposals that inverse marking is simply a special form of agreement morphology (Béjar and Rezac 2009) rather than an entirely distinct inflectional category (as proposed in, e.g., Bliss, Ritter, and Wiltschko 2014).

1:00 PM - 2:30 PM
Semantics Research Group
Thesis proposal of Frederick Gietz (Ph.D.): "A computational approach to complement coercion."
Posted by the U of T Department of Linguistics at 1:39 PM No comments:

With Suzi Lima (faculty) and two language consultants at the helm, this semester's Field Methods class investigated two varieties of Quechua. Following up from last year's workshop on Iranian languages and 2017's on Malagasy, we are holding a Quechua Languages Workshop on Thursday, December 5, in the department lounge. Come hear about the research the students have been doing! (Note: if you would like to attend part or all of the workshop, please register here. Thanks!)

Chanell Chlopowiec (BA):
"When in Peru, do as the Quechua do: A linguistic analysis of compounding in Cuzco and Apurimac Quechua."

Allyson Balaz (MA):
"The semantics of cutting and breaking events in Quechua: A brief typological overview."
Posted by the U of T Department of Linguistics at 1:22 PM No comments:

We hosted a workshop on Urban and Rural Language Research at Trinity College on November 9-10. Conceived by Sali A. Tagliamonte (faculty) and Arne Ziegler (University of Graz), the event brought a number of Austrian visitors to Canada. Fortunately, the snowstorm did not manage to call off the trip to Niagara Falls!

Special thanks to Karlien Franco (postdoc) for her exceptional organisational work throughout the planning process, and to Arne, to Jack Chambers (faculty) and to Derek Denis (faculty) for giving the plenary talks! 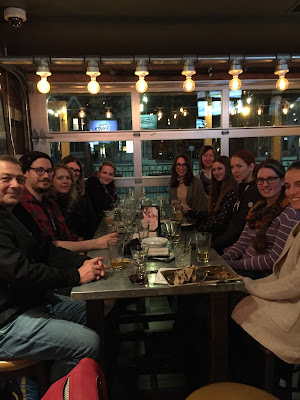 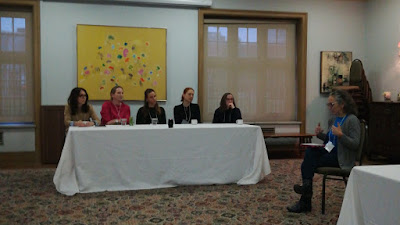 Dragana, Katharina, Teresa, Stefanie, and Lisa Schlegl (Ph.D.) were the panellists on a very lively session chaired by Sali about ethical/logistical issues arising in sociolinguistic fieldwork.
(Photo by Derek.)
Posted by the U of T Department of Linguistics at 6:29 PM No comments: