The Second North American Conference on Iranian Languages took place at the University of Arizona from April 19 to 21. Unfortunately, the American border is currently closed to those who have only an Iranian passport, so some of those taking part (including two members of our department) had to join in via Skype. Given the situation, Noam Chomsky (University of Arizona/Massachusetts Institute of Technology) addressed the attendees twice: once on syntax and once on current U.S.-Iranian relations.

Arsalan Kahnemuyipour (faculty) presented a keynote speech: "The CP-vP parallelism: Evidence from (some) Iranian languages." Note that a recording of Arsalan's talk can be found here. Thanks to the NACIL2 photographers for taking and sharing this image! 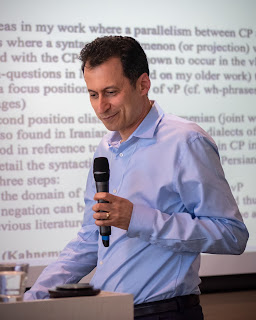 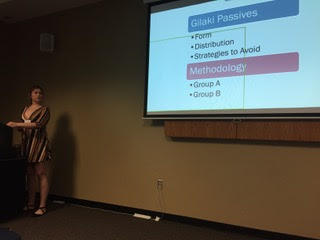 Well done to the organisers and to everyone who participated – whether on-site or from a distance.
Posted by the U of T Department of Linguistics at 4:32 PM