U of T linguists interviewed about Arrival!

In all the buzz about the new sci-fi film Arrival, U of T News interviewed Nicholas Welch (faculty) and Shayna Gardiner (PhD) about the linguistics in the movie! You can read their thoughts here.

Posted by the U of T Department of Linguistics at 6:27 PM No comments:

NWAV45 had some great UofT representation this year! Earlier this month, a number of UofT sociolinguists flew to Vancouver to attend the conference. NWAV this year was co-organized by Alexandra D’Arcy (UofT alum, Ph.D. 2005) of UVic and Panayiotis Pappas of Simon Fraser University. Here are some photos from the trip:

Derek Denis (Ph.D. 2015, now a post-doc at the University of Victoria): “Pathways to homogeneity in Canadian English.”

Aaron Dinkin (faculty): “It’s no problem to be polite: Change in apparent time in responses to thanks.”

Gloria Mellesmoen (MA 2016, now Ph.D. a thet University of British Columbia): “A vague phonological contrast: /eɪg/ as a distinguishing element of BC English.”

Brianne Süss, M.A. 2016: “Style-shifting over the lifespan: Evidence from a Canadian icon.”

Posted by the U of T Department of Linguistics at 2:24 PM No comments:

Our blog is doing a series of interviews with recent hires to the department, and first up is Jessamyn Schertz, who's been hired as an Assistant Professor at UTM / St. George. Most recently she was working in a postdoc position at UTSC with Yoonjung Kang, and we're very happy to have her continue on in her new position. She completed her Ph.D. at the University of Arizona in 2014, and her website is here.

We've also created a new post label called "interview" for this and other interviews in the future.

How would you introduce your research to someone who isn't familiar with linguistics?
I study the fine-grained details of how we pronounce and perceive the various sounds of speech. The “same” sounds can vary across languages (for example, French and English both have “p” sounds, but they are pronounced slightly differently) and even individuals with the same language background will have slightly different definitions of the same sound. The way we produce and perceive sounds is shaped by many factors, including our language background, social characteristics that we ascribe to ourselves and other talkers, the specific communicative situation, and general cognitive processes that may differ across individuals. In my work, I try to tease apart how these different factors interact with one another in 1) by recording speakers and doing acoustic analysis of their speech, and 2) by developing experiments to “map” listeners’ perception of sounds.

How would you introduce your research to a fellow linguist?
It really depends on the linguist. As an introduction, probably pretty much the same way as above, actually!

What kinds of data collection (e.g. elicitation, experiments, oral texts, conversations) do you use in your research?
My work is mostly experimental, although I am interested in doing more corpus work as well.

Is there any research topic, area, or method you haven't explored very much but that you'd like to work with at some point?
I have recently been thinking more about the influence on social factors on speech perception. I’m hoping to take advantage of the rich social and linguistic diversity in Toronto to explore how linguistic and social factors shape perception and production.

What courses do you most enjoy teaching?
I don’t have a favorite, but I do enjoy different aspects of teaching different levels. General introductory courses are always fun because students have no idea what to expect: most have never heard of linguistics, and their assumptions about what it is tend not to match up with the actual course content. On the other hand, the intellectual stimulation of working with advanced undergraduate and graduate students is both exciting and motivating for my own thinking.

What kind of graduate student research projects would you like to be involved in, either as a supervisor, second reader, etc.? (areas and methods)
Along with my primary areas of speech perception and production, I am looking forward to being involved in student projects that stretch my interests: students with primary interests in other subfields who are interested in doing experimental work, as well as projects looking at the relationship between linguistic systems in bilinguals and second-language learners.

What's your favourite thing about Toronto as a city?
I love Toronto! I will try to limit myself to two favorite things. First, I love walking around in all of the different neighborhoods and the opportunity to get groceries from all over the world. Second, there is a fantastic community of amateur musicians in Toronto - the best I have ever found.

Since your main appointment is at UTM, what involvement are you going to have with the St. George department?
Right now, I’m helping to lead the Junior Forum, a professional development course for new graduate students. It’s fun to be involved at the beginning stages of people’s careers. I’ll be teaching grad courses about once a year, and looking forward to serving on thesis/GP/dissertation committees. I’ll also be continuing my involvement with the Phonetics/Phonology and Psycholinguistics groups, as well as research collaborations with my colleagues across the three campuses.
Posted by the U of T Department of Linguistics at 12:26 PM No comments:

Friends of Linguistics At the University of Toronto (FLAUT) recently held a talk by Marshall Chasin titled "Clatter, Music and Hearing Loss". Here's a picture from the event.

Posted by the U of T Department of Linguistics at 3:20 PM No comments:

Here are some pictures from the recent Ph.D. convocation that included graduates from our department.

Posted by the U of T Department of Linguistics at 11:22 AM No comments:

Mo-MOT 1, the First Annual Morphology in Montreal-Ottawa-Toronto Workshop, is being held later this month at Carleton University in Ottawa. The program is available here. Presenters from UofT include:

Alana Johns (faculty) is also the invited speaker on Saturday. 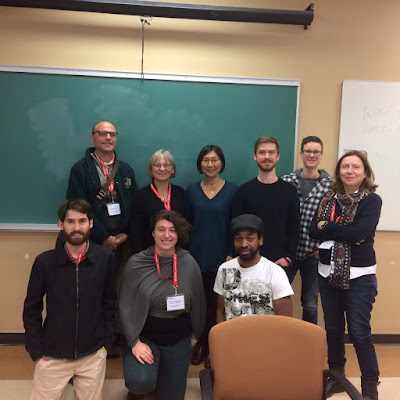