Nicholas Welch (faculty), Shay Hucklebridge (MA 2016, now at UMass Amherst), and Luke West (MA 2015, now at UCLA) were recently featured in a CBC article about a language-learning video game they created around a Tlicho folktale, "How Fox Saved the People". Check out the article here!
Posted by the U of T Department of Linguistics at 8:01 AM No comments:

Arts & Science is currently running a series on their faculty and staff giving campaign, talking with employees of the university who donate. Keren Rice (faculty) was profiled on her donations to scholarship funds in honour of retiring colleagues (link here). Quote:

Why do I give? For many reasons. You see a gap, and you hope that if you do something to fill it, it won’t stay a gap.
Over the past few years I’ve made several donations to scholarship funds in honour of retiring colleagues. In a small department like Linguistics, every single faculty member makes a difference for every single student, and you want to be able to remember the contributions they have made. Each time a student gets a named award, it makes them stop and think about who that person is, what kinds of important contributions they have made.
Last year we set up a new undergraduate award in honour of our colleague Elaine Gold, who had just retired and become the Director of the Canadian Language Museum. When I wrote the student to tell him he’d gotten the award, he was just so flattered to be recognized. It’s not a lot of money, but it made him feel like his hard work had been noticed.
As a faculty member, I donate to scholarships at U of T because I am at a stage in my life when I have the means to do so and am thinking about what kinds of things I want to support. Honouring my colleagues and helping our students are definitely worthwhile causes.

Posted by the U of T Department of Linguistics at 8:46 AM No comments: 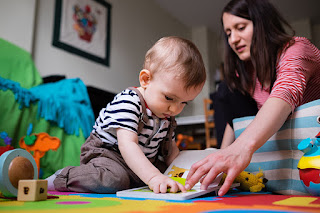 “It's important to have a safe and secure space that allows parents to engage in their academic pursuits while also caring for their children,” says Larry Alford, the university's chief librarian.
Angelika Kiss, a PhD student in linguistics, says the new space will come in handy.
She usually studies at home where she can watch her energetic 9-month-old Mark.
It isn't long before Mark loses interest in his picture-books and demands his mom's attention. “I would love it if I could just read a few pages of an article with Mark being awake because that's sometimes impossible. He's so active,” Kiss says.
A special room for parents who want to use the library would make it much less tricky to do research with a toddler in tow, she says.

Posted by the U of T Department of Linguistics at 8:35 AM No comments:

The Undergraduate Research Forum took place in the Great Hall at Hart House on March 14. Linguistics undergrads were well-represented by 3 research posters:
Students interested in these sorts of opportunities should check out: http://www.artsci.utoronto.ca/current/focus/research

Posted by the U of T Department of Linguistics at 8:42 AM No comments:

Posted by the U of T Department of Linguistics at 8:21 AM No comments:

Sali Tagliamonte at South by Southwest

Sali Tagliamonte (faculty) was at South by Southwest (a music/film/etc. festival) in Austin, Texas this week. She participated in a panel on language and the Internet titled “Doggos, Bork, BAE: the New World Language”. It was one of the few events at the festival focused on language. The moderator was Neha Bansal and the participants were: Nick Farmer, Subramanyeswar S, and Sali Tagliamonte.

Posted by the U of T Department of Linguistics at 9:21 AM No comments:

Safieh (Safi) Moghaddam (Ph.D. 2016) will be joining the Centre for French and Linguistics, University of Toronto, Scarborough, in the position of Assistant Professor, Teaching Stream in Linguistics. Congratulations, Safi!

Posted by the U of T Department of Linguistics at 8:37 AM No comments:

Linguistics in the community: Grade 8 school project on constructed languages

Shortly after arriving in Toronto in July, Professor Nathan Sanders began mentoring local student, Ben Kramer, for his Grade 8 project at the Halton Waldorf School in Burlington.  Every student in the grade selects a major project for the year and seeks out a mentor to help guide them.  For his project, Ben designed his own constructed language, Gəfedbemar, and wrote up a grammar, which includes an abjad orthography, rules for building words and sentences, a glossary of hundreds of words, and sample translations.  The finale to the project was a well-delivered and well-received public presentation on March 7th, in which Ben spoke in Gəfedbemar and described the process of building the language.  Signed copies of his grammar were very popular with the crowd! 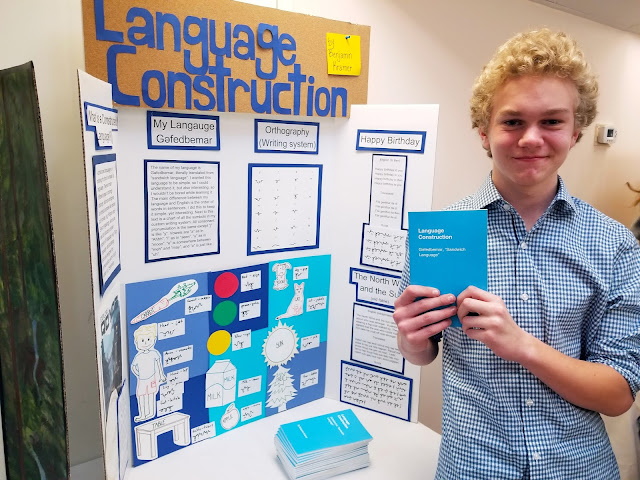 Posted by the U of T Department of Linguistics at 7:54 AM No comments: