New issue of The Canadian Journal of Linguistics; Elizabeth Cowper taking over as editor

The July 2016 issue of The Canadian Journal of Linguistics / La revue canadienne de linguistique (which is now available through Cambridge University Press here) has been released. With this issue, Elizabeth Cowper (professor emeritus) starts her three-year term as editor. Other U of T involvement in the issue includes the squib "Confronting the European Portuguese central vowel distinction" from Christopher Spahr (Ph.D. 2015).
Posted by the U of T Department of Linguistics at 9:13 AM No comments:

Alex Motut featured in U of T News: Innovations in teaching

Alex Motut (Ph.D.) and her instruction of LIN204 (English Grammar) were recently featured in U of T News' "Innovations in teaching" series, in an article available here.

LIN204, which the article notes is one of the most popular course offerings of our department, has an enrollment mostly of students in disciplines other than linguistics—putting Alex in the position of providing the first (and possibly last) substantial taste of our field to a large number of students.

With this opportunity she introduces them to fundamental principles of how linguists approach language (descriptively rather than prescriptively), and encourages them to think like linguists by asking them to reflect on why sentences like "I went to the bank" sound fine even if the listener isn't familiar with the particular bank being referred to.

The article also highlights her incorporation of non-standard and innovative uses of English into the course, including "man" as a "street pronoun" that is flexible when it comes to person, number, and gender (as seen in the example "it's her personality man's looking at"), a usage that U of T alumnus Derek Denis (now at the University of Victoria) is currently working on in his research.
Posted by the U of T Department of Linguistics at 10:09 AM No comments:

The UofT linguistics community was well represented at LabPhon 15, which recently took place (July 13-16, 2016) at Cornell University in Ithaca, NY. A full list of our involvement (with all co-authors) is available here.

Posted by the U of T Department of Linguistics at 3:55 PM No comments:

The 2016-17 academic year is nearly upon us, and there is quite a bit of coming-and-going happening!

Posted by the U of T Department of Linguistics at 2:34 PM No comments:

Fieldwork and exchange in Slovenia

In the last weeks of June, three undergraduate students in our department and Peter Jurgec (faculty) visited Slovenia to present ongoing research on Slovenian and to do fieldwork on two dialects of Slovenian, sponsored by a grant from the Germany/Europe Fund to Peter Jurgec.

The students had a chance to experience fieldwork firsthand. In Mostec, we examined nasal harmony using a dual-chamber nasalance mask, instrumentally confirming thus far the first case of nasal harmony in a Slavic language. In Šmartno, we looked at nominal paradigms, filling the gaps in the existing data, using elicitation.

Here is what the students said about the trip:

"I feel homesick for Slovenia and not even Toronto. It was really a lot of fun learning how to operate the nasometer on participants and handle the data. I had a wonderful time […] doing such cool fieldwork."

"I loved being able to practically apply so much of what I had learned on campus to our fieldwork in Slovenia. The participants were wonderful people to work with and I really enjoyed analyzing their data and finding exactly what we were looking for (especially the nasal harmony!). I also greatly appreciated having the chance to give a presentation at the University of Ljubljana and valued the presentations they gave on Slovenian stress and dialectology."

Researchers from Ljubljana will be visiting our department in February 2017. 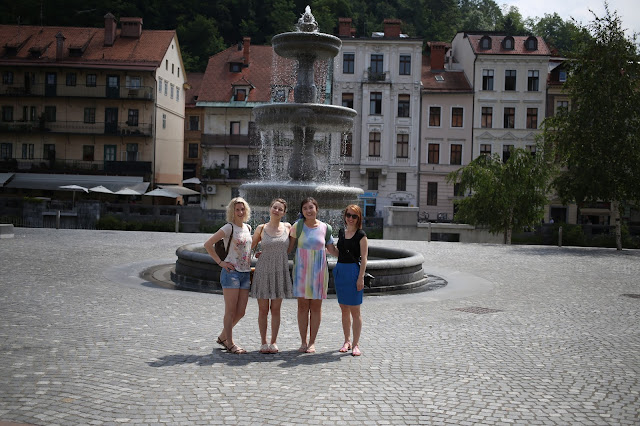 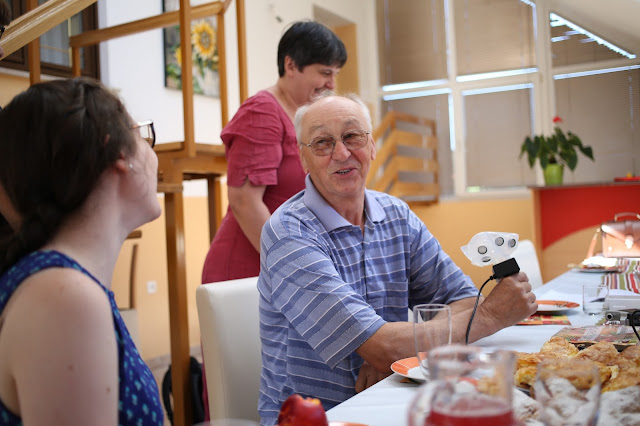 A student and a Slovenian linguist, Professor Karmen Kenda Jež, with
a speaker of Mostec, a dialect of Slovenian with nasal harmony. 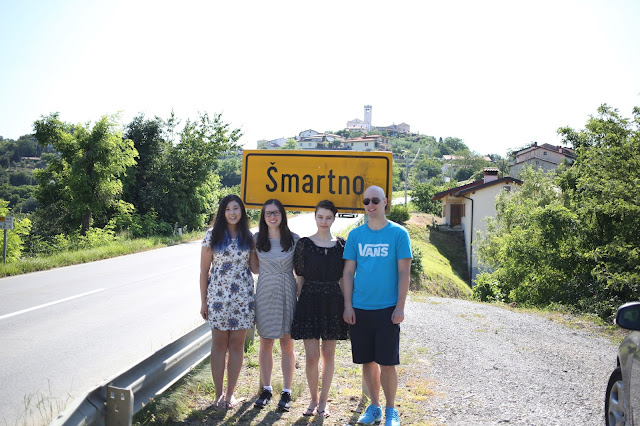 The Toronto team (Zhiyao Che, Fernanda Lara Peralta, Mia Sara Misic, and Professor Jurgec)
in front of the village of Šmartno [ˈʃmaɾtno], as seen above the sign. 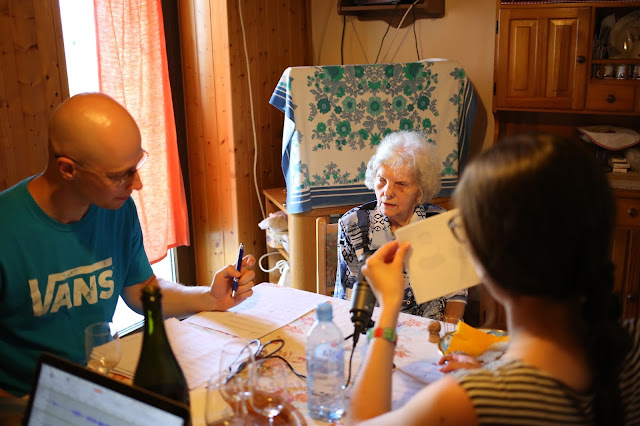 Elicitation in Šmartno.
Posted by the U of T Department of Linguistics at 10:34 PM No comments:

The 15th Conference in Laboratory Phonology (LabPhon 15) is taking place at Cornell University in Ithaca, New York from July 13 to 16. The theme is 'Speech dynamics and phonological representation'.

Alexei Kochetov (faculty) is presenting a talk along with three colleagues from the Ludwig Maximilian University of Munich: Marianne Pouplier, Stefania Marin, and Conceicao Cunha: "Probing the interaction of dynamic stability with grammar: Evidence from Russian."

Many current department members and alumni are presenting posters. In particular, there are several being presented by teams comprised of a graduate student and at least one faculty member!

Jessamyn Schertz (postdoc), Yoonjung Kang (faculty), and colleague Sungwoo Han (Inha University):
"How much does the talker matter? Depends who's listening: Age-related variability in the use of social information in speech perception."

Mercedeh Mohaghegh (Ph.D.) and Craig Chambers (faculty):
"The effect of phonological context on the perception of strong place assimilation in nasal and stop consonants."

"Locality and variability in cross-word alternations: A production planning account."
Posted by the U of T Department of Linguistics at 9:49 PM No comments:

Elaine and Michela in Italy 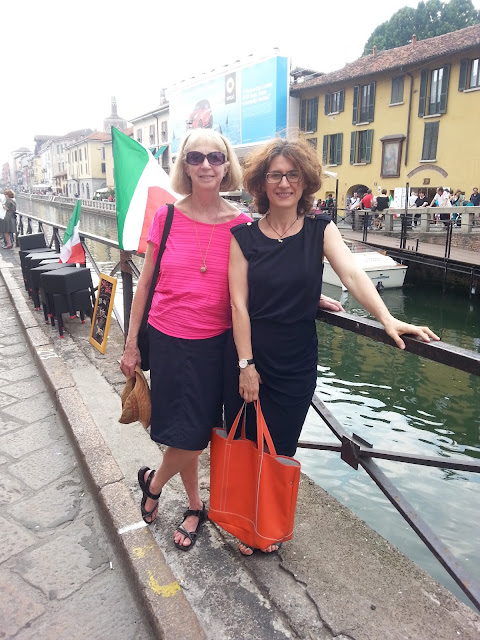 Elaine Gold (faculty) visited Milan recently for an international conference on language museums. She met up with fellow faculty member Michela Ippolito, who grew up here, and they met alongside the canals!
Posted by the U of T Department of Linguistics at 7:09 PM No comments:

This year's Institute on Collaborative Language Research (CoLang) is being held at the University of Alaska, Fairbanks, throughout the month of July. This intense month will expose participants to practical techniques in linguistic fieldwork and language revitalization.

In this photo, faculty member Keren Rice and Ph.D. students Maida Percival and Clarissa Forbes at CoLang. Word has it that they are enjoying the Alaskan summer under the midnight sun! 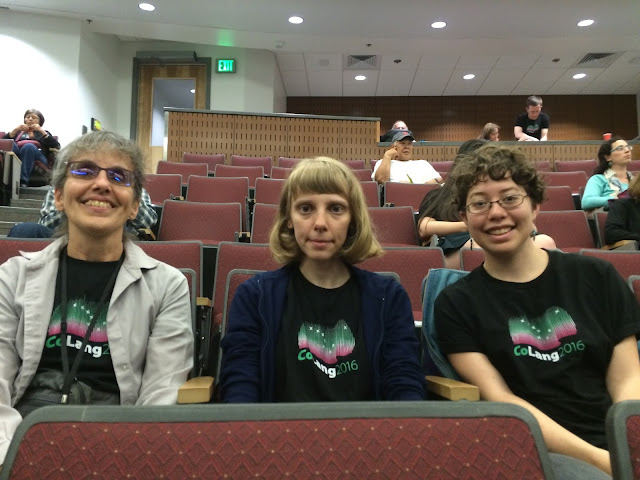 Posted by the U of T Department of Linguistics at 8:16 PM No comments: