The Linguistic Society of America is holding its 93rd Annual Meeting in New York City from January 3rd through 6th. Alongside it are the annual meetings of a lively, ever-increasing bunch of special-interest 'sister societies'. Participants associated with our department are as follows.

"Generalizations and their exceptions: DOM in Romance diachrony."

Clarissa Forbes (Ph.D. 2018, now at the University of Arizona) is presenting a poster:
"Ergative agreement switch and unlicensed absolutives in Tsimshianic."

Nicholas Rolle (MA 2010, now at the University of California, Berkeley):
"A cyclic account of a trigger-target asymmetry in concatenative vs. replacive tone."

The same pair is also presenting a second talk:
"Dialects haven't got to be the same: Modal microvariation in English."

As well as a poster:
"Transparent free relatives with who: Support for a unified analysis."

Michelle Yuan (MA 2013, now at the University of Chicago):
"On the interaction of Merger and copy spell-out: Insights from Inuktitut noun incorporation."

Former visiting scholar Holman Tse (University of Pittsburgh) has a poster:
"Can heritage speakers innovate allophonic splits due to contact?"

We are well-represented at the ADS. Our current chair, Sali A. Tagliamonte, is leading a double life as the organization's president, and will be giving the speech at the Annual Luncheon: "Doing dialectology in the 21st century." In what may or may not be a coincidence, the first ADS session this year is entitled 'University of Toronto linguists have some things to tell you about Canadian English'. Indeed we do:

Bridget L. Jankowski (staff; Ph.D. 2013) and Sali A. Tagliamonte (faculty):
"'He come out and give me a beer, but he never seen the bear': Old preterites in Ontario dialects."

Alexandra D'Arcy (Ph.D. 2005, now at the University of Victoria):
"Exploring the dynamics of language change through the lens of community, caregiver, and child."


Society for Computation in Linguistics (SCiL)

Society for Pidgin and Creole Linguistics

Frederick Gietz (Ph.D.):
"Lexical and computational tools for determining the origin of Lingala."

Society for the Study of the Indigenous Languages of the Americas

Derek Denis (faculty) and Sali A. Tagliamonte (faculty) have a paper out in English Language & Linguistics, 22(3): "The changing future: Competition, specialization, and reorganization in the contemporary English future temporal reference system."

The English future temporal reference system has long been recognized as a variable system undergoing change. The main variants in contemporary English (will and be going to) have both been argued to have gone through (and to potentially still be undergoing) grammaticalization. At the same time, be going to has been gradually increasing in frequency relative to will over the last 500 years. However, investigation of the ongoing development of this system has been sparse. This article makes use of a large contemporary sociolinguistic corpus of a mainstream variety of North American English and the apparent-time construct. Several factors that have been implicated in the development of this system (sentence type, clause type, proximity, verb type, animacy, and grammatical person of the subject) are considered and a multiplex series of changes are uncovered. Underlying an overall, albeit slow, change in frequency towards be going to, we find evidence for specialization of one or the other variant in different linguistic contexts, neutralization of a constraint consistent with ongoing loss of variant nuances through semantic bleaching, and the persistence of constraints consistent with morphological doublet competition.
Posted by the U of T Department of Linguistics at 12:56 PM No comments:

This paper presents an extension of indexed constraints, such that they can apply not only to individual morphemes, but also to potentially complex constituents such as the stem. This modification allows us to capture a class of long-distance morphologically derived environment effects (MDEEs) that have been previously unexplained. MDEEs typically involve an exceptional phonological pattern that is lost under affixation. Formally, MDEEs are predicted if complex constituents such as stems are treated as lexically exceptional only when every morpheme contained within them is independently exceptional. This approach further predicts asymmetries between bare roots and affixed words, between roots and affixes, and between inflected and derived words. All other things being equal, the first of each pair is more likely to be exceptional in more contexts.
Posted by the U of T Department of Linguistics at 2:09 PM No comments:

Our faculty and staff enjoyed a holiday lunch at Her Father's Cider Bar and Kitchen on Friday, December 14. Thanks to the restaurant and its employees for their hospitality (and for taking the photo!). 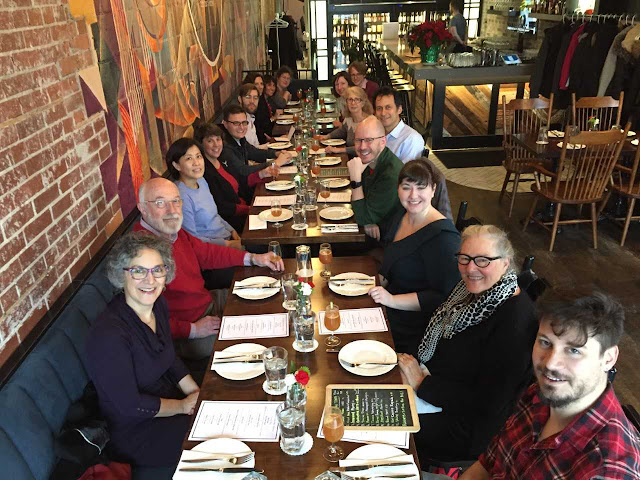 Thursday, December 13, 1:00 PM - 3:00 PM, SS 1086
Language Variation and Change Group
Practise talks for LSA/ADS/other conferences held alongside.
Posted by the U of T Department of Linguistics at 9:01 PM No comments: 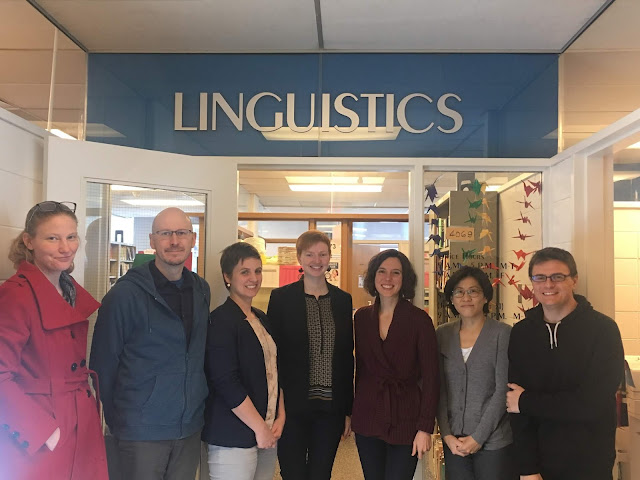 Elizabeth, Nathan, Meghan, Emily, Jessamyn, Yoonjung, and Phil. (Photo by Jennifer McCallum.)
Posted by the U of T Department of Linguistics at 3:16 PM No comments:

The Department of Philosophy is hosting a workshop, New Perspectives on Mental State Attribution, early next week. This will be taking place at the Jackman Humanities Building (Room 100) on Monday, December 10, and Tuesday, December 11, from 9 AM to 5 PM both days. The program features a mix of guest speakers giving in-depth presentations. Of particular interest to the linguistics community are the two talks on the Tuesday afternoon, as follows:

2:00 PM to 3:30 PM:
Elizabeth Bogal-Allbritten (University of Gothenburg):
"Building attitudes in the grammar."

4:00 PM to 5:00 PM
Rachel Dudley (École normale supérieure):
"Pragmatic effects in child's understanding of attitude verbs."
Posted by the U of T Department of Linguistics at 11:34 PM No comments:

Our department has a cluster of scholars keenly interested in the languages of Iran. On top of that, this semester's JAL401: Field Linguistics class taught by Suzi Lima (faculty) collectively investigated Gilaki, an Indo-Iranian language spoken in the northwest of the country. In other to showcase their research, we will be holding a workshop on Iranian languages: Thursday, December 6, from 10 AM through 3 PM in the department lounge. All departmental members are encouraged to attend!

Arsalan Kahnemuyipour (faculty):
"Everything I know about Gilaki."

Sahar Taghipour (Ph.D.):
"Definiteness in Laki: its distribution and properties."

Jida Jaffan (MA):
"One way and the other: assessing the origins of Arabic and Gilaki loanwords based on the undergone linguistic processes."

Breanna Pratley (BA):
"Distribution of active and passive constructions in Gilaki."
Posted by the U of T Department of Linguistics at 11:36 AM No comments:

Note that the Fieldwork Group meeting this week is cancelled.

10:00 AM - 11:30 AM
Language Variation and Change Research Group
Group discussion: Lewis, Mark (2018). A critique of the principle of error correction as a theory of social change. Language in Society, 47(3), 325-346. And an overview of the Journal of English Linguistics, 46(3), on practical strategies for opposing linguistic discrimination.

11:30 AM - 1:00 PM
Syntax Group
Nico Baier (McGill University): "Unifying anti-agreement and wh-agreement."
In this talk, I investigate the sensitivity of φ-agreement to features typically associated with Ā-extraction, including those related to wh-questioning, relativization, focus and topicalization. This phenomenon has been referred to as anti-agreement (Ouhalla 1993) or wh-agreement (Chung and Georgopoulos 1988; Georgopoulos 1991; Chung 1994) in the literature. While anti-agreement is commonly held to result from constraints on the Ā-movement of agreeing DPs, I argue that it reduces to an instance of wh-agreement, or the appearance of particular morphological forms in the presence of Ā-features. I develop a unified account of these Ā-sensitive φ-agreement effects in which they arise from the ability of φ-probes to copy both φ-features and Ā-features in the syntax. In the morphological component, partial or total impoverishment may apply to feature bundles containing both φ- and Ā-features, deleting some or all of the φ-features. Impoverishment blocks insertion of an otherwise appropriate, more highly specified agreement exponent.
Posted by the U of T Department of Linguistics at 10:13 PM No comments:

The students of LIN362: Historical Linguistics, taught by Aleksei Nazarov (faculty), will be presenting their final projects in the form of a poster session in the department lounge on Tuesday, December 4, from 5:00 PM to 7:00 PM. All department members are encouraged to attend!
Posted by the U of T Department of Linguistics at 4:37 PM No comments:

Peter Jurgec (faculty) has been awarded an Erasmus+ Mobility Grant, which provides considerable funding for inter-institutional exchange. We will be sending a graduate student from our department to visit Slovenia next autumn; a graduate student from Ljubljana will visit us at the same time. Two of our faculty members will be visiting Slovenia (and vice versa) for a week each sometime in the next two years. We anticipate that the grant will further strengthen our department's interests in Slavic languages from a variety of perspectives and approaches. Congratulations to Peter on the recognition and on opening up this tremendously valuable opportunity for all of us!
Posted by the U of T Department of Linguistics at 1:05 PM No comments: