Alexei Kochetov and Laura Colantoni (Dept. of Spanish and Portuguese) have been actively involved in an extensive phonetic electropalatographic (EPG) investigation of Argentine and Cuban Spanish. 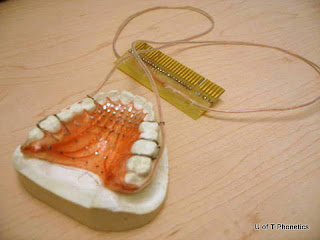 This project – the first articulatory kinematic study of these varieties – consists of a series of experiments examining variation in the articulation of coronal consonants, the processes of nasal place assimilation and s-deletion, and a change in progress in Buenos Aires Spanish resulting in the depalatalization of palatal nasals. EPG is particularly suitable for this kind of research, as it records the timing and location of the tongue constriction during speech using an artificial palate equipped with 62 electrodes. Data collection and analysis for the project (funded by Connaught) are being performed in the Linguistics Department Phonetics Lab, with the assistance of a work-study student Bojana Radovanovic. 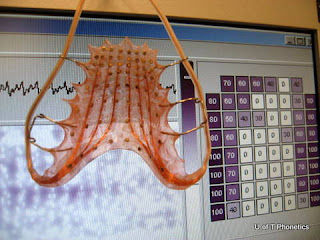 Some of the results from the project have been presented at the 158th Meeting of the Acoustical Society of the America in San Antonio, TX in October, 2009 (poster), the 23rd conference Going Romance in Nice, France in December 2009 (slides), and will be presented soon at the 28th West Coast Conference in Formal Linguistics in Los Angeles, CA (February 2010), the 40th Linguistic Symposium on Romance Languages in Seattle, WA (March 2010), and at the 12th conference on Laboratory Phonology in Albuquerque, NM (July 2010).

Alexei and Laura are currently looking for more speakers of Cuban Spanish from Havana. Please contact them at al.kochetov@utoronto.ca or laura.colantoni@utoronto.ca if you happen to know suitable candidates.

Posted by the U of T Department of Linguistics at 4:58 PM