The four-week 2019 Linguistic Institute run by the Linguistic Society of America has just wrapped up at the University of California, Davis. Our department was involved in three ways.

Several of our students - Gregory Antono (BA), Rosalind Owen (BA), and Max Haohang Xi (BA) - were in attendance this year and navigated an intense month of classes, symposiums, social events, and networking.

One of the themes of this year's Institute recognized the United Nations International Year of Indigenous Languages, and the associated Dene Languages Conference included presentations by Keren Rice (faculty) and Alessandro Jaker (postdoc).

We also had two current departmental members teaching. The other of this year's Institute themes was Linguistics in the Digital Era; in conjunction with this, Marisa Brook (faculty) and Emily Blamire (Ph.D.) teamed up to teach 'Topics in Sociolinguistics and Computer-Mediated Communication'. 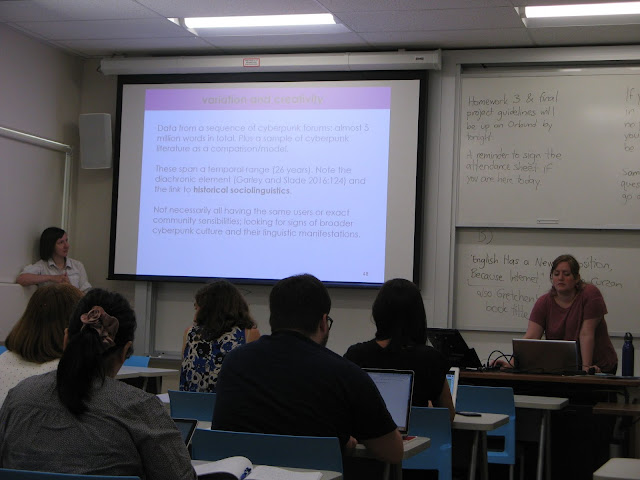 Marisa and Emily explain the Internet, or at least the linguistic elements thereof. (Photo by Mark Richard Lauersdorf.)
Posted by the U of T Department of Linguistics at 1:42 AM